Another one of my most popular recipes, this crisp is Autumn personified.  Sweet, tart, buttery, crunchy, spicy – yeah…just about everything you want in a dessert!

I love, love Cinnamon Bliss , and created this recipe especially for use with this product.  However, you’ll probably have to order it (well worth the effort, and excellent in so many things, you won’t be sorry) and if you want apple crisp NOW a good sub is needed.  Store bought sugar free caramel sauce is great, but there’s nothing like homemade and I’ve got you covered there, too! (Caramel Sauce recipe)

Serve with NSA vanilla ice cream, whipped cream, or even just warmed heavy cream.  (ANY sort of cream puts this over the top!)

In a large bowl stir together apples, Splenda, Cinnamon Bliss, flour, cinnamon, salt, and half & half. Pour into prepared baking dish and set aside. In the same bowl mix until crumbly the oatmeal, almond flour, Splenda, cinnamon, and melted butter. Spread over top of apples. Bake for 1 hour, cover loosely with foil during last 30 minutes. Makes 10 servings. 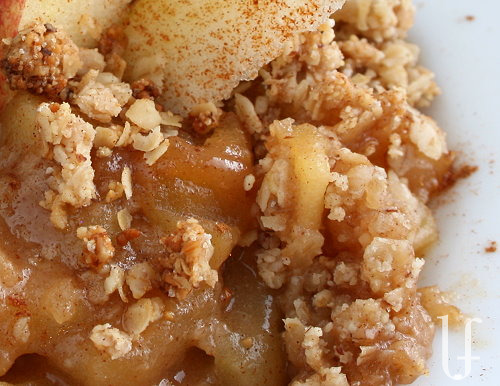 PIn it and more!!